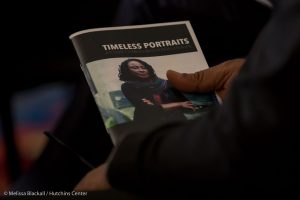 We who love contemporary jazz have been mourning the death of Geri Allen (1958-2018). Yet Geri Allen was always emerging, adding new dimensions. And it’s still true. Earlier this month at Harvard University, a free and open festival/symposium entitled Timeless Portraits gave time and space to celebrate her music, life, spirit and legacy. My friend Ingrid Monson was a conference organizer and I happily attended. 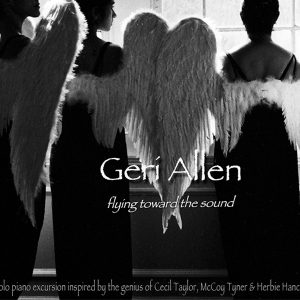 Keynote speaker Farah Jasmine Griffin, scholar and Columbia University Professor, wrote the notes for Allen’s Flying Toward the Sound solo piano album (Motéma 2010). The visual artwork came from Carrie Mae Weems who – later in the day, accompanied by Esperanza Spalding on bass and Terri Lyne Carrington on drums – presented her still images and video of Geri. Flight is a metaphor for freedom, Griffin said. “Where Geri led, love and beauty followed.”

Panelists Jason Moran, Craig Taborn, Kris Davis and Vijay Iyer (left to right) addressed the topic of Geri Allen and the Piano. My notes contain their confessions – “I am fully influenced by,” “very directly,” “I have plagiarized” – and descriptive phrases for musical selections that they played for us – “as though she has three hands!” “flip[s] a phrase,” “wastes no time,” “she’s dancing!”

At the night-time concert in Paine Hall, each pianist played alone and in duets with the other three. Practically no words were spoken. Jason Moran’s unbound interpretation of “Life Every Voice and Sing” made me think of war, of Syria. Of how Geri Allen – so self-possessed – made emotional and powerful music. Kris Davis and Craig Taborn concluded with Davis’s transcription of “Black Man” ( from Home Grown 1985). On paper Davis uses three staves, as though Allen is playing with three hands. “You hear her hands,” Vijay Iyer said, “… hear that mind at work” in Taborn’s phrase. 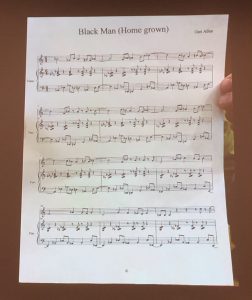 I do not have the Friday night set list. And the sequence of pianists alone then in duets is a brain teaser. Please, someone, send it! I will share.

In the next post, I’ll start with Saturday, February 17, 8:30am, the Symposium, Geri Allen as Scholar and Educator.

A Geri Allen discography is here. 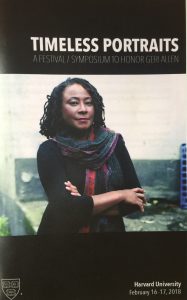 Members of Geri’s community gathered at Harvard University to appreciate her as pianist and collaborator, scholar and educator, visionary and historical figure and more. The symposium agenda is here.

The Friday night concert, Pianos for Geri, featured four players, one and two at a time. Voices and instruments expanded the sound on Saturday for Geri: Genus, Grace and Fire. Set lists to come.

Great thanks to organizer Ingrid Monson and her colleagues – Terri Lyne Carrington, Vijay Iyer, Esperanza Spalding – and all who participated.