I have something new to love: Dorrance Dance. The tap troupe is at City Center here in New York through March 30. Last night was opening night.

Bill Irwin in top hat and tails choreographed, wrote and narrated Harlequin and Pantalon for one dancer – Warren Craft – in both roles. First he’s tall and wearing a diamond-patterned leotard (Harlequin), then a crooked old man in a black frock coat (Pantalon). Though they never share the stage (your first hint), the dancer slips behind a narrow satin curtain or disappears into an open trunk just long enough to hide the gleeful, almost successful costume changes. And Irwin (seated to the side) is guileful, slipping an obsequious reference to “the Endowment” (as in the National Endowment for the Arts) into an old tale as Harlequin and Pantalon fight over who owns the dancer and the dance.

In Jump Monk the ten Dorrance dancers tap, mostly in unison, to Brenda Bufalino’s choreography and Charles Mingus’s “Moanin’”. (“Jump Monk” and  “Moanin’” share the same chord progression.) The sound design for this concert is foot-first, alive with the color and nuance of the countless ways a tap can hit the floor. I could close my eyes and listen but the dance is too good, even for a moment. Toward the end, as the live musicians dropped out, the dancing feet carried on and on, to the joy of all.

SOUNDspace – the second half of the concert – has no accompaniment. The  choreography is by Dorrance and spotlights individual improvisations. At first you see just the dancers’ knees-to-feet in a row across the lip of the stage. They tap in the rhythm of a mighty railroad train coming down the tracks. Then Michelle Dorrance emerges in a long solo as the owner of two bare legs that seem interchangeably left and right. Tapping and re-mapping the stage, smiling and effortless, she is both boundless and precise. Also camoe-ed, Warren Craft (again) moves as a puppet on many strings.  Nicholas Van Young brings a Paul Bunyan woodchopper look (life-sized, not a giant) as he slaps his thighs and taps his chest while his feet tap.

Throughout, I sat next to an empty chair and missed my friend Sue Moore. Until a few weeks ago, Sue was going to concerts and plays and reviewing them on her Facebook page. All the time she was fighting cancer.  Earlier this month, she had to let go and on Monday, March 25, she died. Sue, I miss you. You are a mighty inspiration. A friend. Thank you. 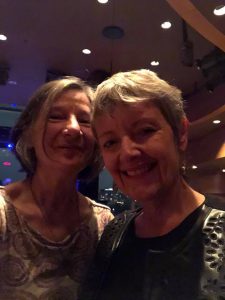