I made a timed-ticket reservation for Sunday noon to see the free outdoor exhibition Hope Wanted: New York City Under Quarantine at the New York Historical Society. The space is not large; it has the footprint of a few townhouses. It’s grassy in the middle, bright green on this sunny day. Around the perimeter, photographs of different sizes are “hung” like paintings on a gallery wall, in order from The Bronx to Queens, Brooklyn, Manhattan and Staten Island. All photos (there are 50, chosen from more than 1,500) were taken over two days, a month into the lockdown and just before April 11 when Governor Cuomo announced that the State of New York had reached the apex and was beginning to plateau.

Photographer Kay Hickman and journalist Kevin Powell also gathered the subjects’ stories, edited to 90 seconds or so and accessible inside the exhibition space by cell phone. Hany Nashed did the driving; he’s photographed as well.

There are visual signs of spring — a sweet pink-flowering bush near a stoop says April — but the human body language communicates a stronger message. Stay inside. People are photographed through windows, in doorways, some walking in the streets with masks or scarves over their faces. Their voices — except for one or two — sounded flat to me. A young Brooklyn woman huddled in her doorway says she works alone at home all day, then paints and walks five miles at night. A music teacher from Fordham University says “I have gone through a variety of negative emotions ranging from rage, to fear, to despair.” (Transcripts come with the audio.)

The Apollo Theater in Harlem and Kings Theatre in Brooklyn are closed. They speak through their marquees. “Keep ya head up” (Tupac). “Keep calm and wash your hands.” A few riders are waiting in the Staten Island Ferry Terminal; Times Square is empty save for a bicyclist. We’ve made a lot of progress. It’s good to look back.

Coming to the stage, Branford said he loves Rose Hall and opened with “a love song” by bassist Eric Revis. “Dance of the Evil Toys” quickly became demonic – soldiers in combat while the children sleep – and near me an audience member called out “If that’s a love song, you better play a war song.”

“Dance of the Evil Toys” also opens The Secret Between the Shadow and the Soul, released today, March 1, on Okeh Records.

For “Conversation Among the Ruins,” composed by pianist Joey Calderazzo, Branford shifted from tenor saxophone to soprano. His powerful breath delivers streams of ideas balanced by Calderazzo’s musical speech and theater. Once to my absolute delight Joey’s two fists chased each other up the piano keys. But only once. This music does not indulge in reprises.

So it was surprising that tune #3 was “When I Take My Sugar to Tea” (played by Chico in the Marx Brothers’s Monkey Business in 1931, a fact I learned after the show). Marsalis on tenor. The strategy emerged: a song for the audience, a song for the band.

“Light Filtering from the Water Flowers” (soprano) felt cinematic … French? … a thunderstorm? … braiding improv and narrative … Marsalis back-announced the piece and the name confirmed the experience. “Sunny Side of the Street” (tenor) came as a graceful lament. Then the finale jettisoned storylines and lyricism for intensity,  speed and accuracy, hard work. Drummer Justin Faulkner leaned in big time.

Citizens of the Blues – trumpet, piano, bass and drums students from Juilliard and Manhattan Schools – opened the concert, and they played their opportunity just right. After two original pieces, they surprised this older audience with the unadorned, distinctive melody of “A House Is Not a Home” (1964 hit for Dionne Warwick), back announced by trumpeter Anthony Hervey who said, “If you recognized it, we did our job,” with Isaiah J. Thompson, piano; Philip Norris, bass; Domo Branch, drums.

Wish I had a picture.

The concert felt historic, with an arc from — encore to opener — Billie Holiday to original music of this moment. The selections came in pairs, and I wish I could see and hear every one, again and again.

Goddess of the Hunt (Miller) … Fool on the Hill (Lennon and McCartney, arr Jensen)

A note about photographer Enid Farber: last month at the Freespace Jazz Festival in West Kowloon, Hong Kong, she spoke about Women in Jazz and  presented many of her photos of women jazz musicians, as well as a slide show on a 19 foot LED screen featuring her work from 1978 to today. In Hong Kong! Then she came home and documented Artemis at Carnegie Hall. For information or to present her historic photos, contact enid@enidfarber.com.

Monday nights at The Jazz Standard on East 27th Street in New York City are for the Grammy Award-winning Mingus Big Band! In 2010 they won the award for Best Large Ensemble Album. It’s time for their next Grammy, and the set I saw on Monday, October 14, could have been a contender, had it only been recorded.

Early on, leader Alex Foster introduced young bassist Marcos Varela, new to the band. He was ready and showed no fear. Theo Hill on piano (new to me) was percussive and exciting. And veteran Earl McIntyre on bass trombone rocked the room. The trombones are the solar plexus chakra of the MBB. This may be an ill-advised metaphor. The heart of the set was “Fables of Faubus” (Orval Faubus was Arkansas Governor in 1957 and obstructed the integration of Little Rock Central High School) leading to “Haitian Fight Song.” Several young people from the audience stepped up and talked about the current life-and-death crisis in Haiti. Afterwards they were raising money at the door.

On Friday at NYU, composer George Lewis’ Soundlines concert opened with percussionist Steven Schick narrating and accompanying his story of his 700+ mile walk from San Diego to San Francisco. Twenty miles a day, six days a week, seven weeks, more than a million steps. While he walked he tried not to overthink, but sometimes he couldn’t stop himself. “My calves are screaming!” was one outburst. A small ensemble played on a platform above him, and electronic sounds like gulls and traffic washed in from the sides. Big orange signal lights pulsed on and off.

Soundlines is a work in two parts. More small string/winds/voice ensembles materialized for the second composition, P. Multitudinis. The Latin text comes from philosopher Baruch Spinoza (1632-77). “The right of the commonwealth is determined by the power of the people . . . . for the good of all men.” In the program notes, Lewis writes that “the performance is achieved through negotiation and consensus, and its success will be less a question of individual freedom than of the assumption of personal responsibility for the sonic environment.”

A conductor zigzagged from group to group, cueing the ensembles to follow invisible (to the audience) written instructions like “Create a short solo,” “Play as fast as possible,” “Wait for another ensemble to stop, then imitate their action.” The order was random so every performance will be different. Experiencing it is like watching eggs hatch in nests around and above the stage. When the house lights came up, we knew it was over. 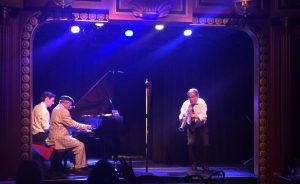 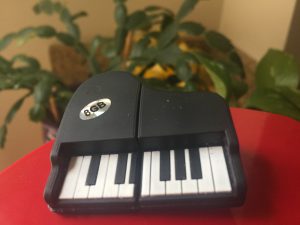